Last week, the remains of 215 children - some as young as 3 YEARS OLD were found on the grounds of a residential school in British Columbia.  The horrific reality is that it is almost a certainty that every single residential school in Canada will reveal a similar horror.  Canada's history of genocide with respect to the Indigenous peoples in this country is unequivocal and utterly terrible - and is compounded by the continued prejudice, racism and treatment of the Indigenous population today.  Many Indigenous communities continue to have NO access to clean water - keeping in mind many of these communities exist only because these groups were RIPPED from their ancestral lands and forced to go to places that were unsustainable and foreign to their way of life.  Indigenous people continue to be disproportionately represented in the penal system - they continue to be denied basic rights to food, education and dignity of person.  Indigenous women are routinely and disproportionately "lost" - murdered with no one caring what has happened to them. 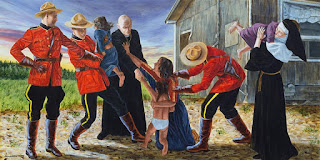 And Canada continues to deny, tiptoe around and downplay the concerted and deliberate genocide of entire nations of Indigenous people through the benignly labelled "residential schools".  To be clear, the reality is that children as infants and as young as 2 or 3 were STOLEN from their families and communities and thrust into primarily religious-based residential schools where they were punished (horribly) for speaking their own language, sexually abused, beaten, tormented and MURDERED all with zero repercussions to the perpetuators of these horrors.  And to be clear, these "schools" functioned well into the 1970s and 80s!

The consequences and end result of this trauma reverberates to this day.  Torn away from their families, denied their culture, denigrated, beaten, sexually abused, these children were then thrown out into society with zero support and then told THEY were the issue when they were unable to function in a healthy way.

Every single residential school MUST be forensically checked and these CHILDREN must be FOUND and returned to their communities. Canada must have a national Day of Mourning not just out of respect for the horror these children endured but as a reminder and ongoing admittance that current and future citizens MUST NEVER FORGET.

Make no mistake - residential schools were a concerted, deliberate and systemic attempt to eradicate Canada's First Nations - to obliterate and destroy the cultures, the language and the reality of nations that had flourished and existed long before the white colonists were still in caves.

I have a couple of my own stories that I will relate shortly but I am so overwhelmed at the horror right now i can barely think...

Several years ago, there was a terrible bus crash in Humboldt where 16 (white) hockey players were killed.  It is awful, yes, but the absolute measure of horror, help and outrage over that was so disproportionately HUGE and an immediate day of mourning was announced.... 215 small children are discovered in mass graves and so far NOTHING.... Racism is alive and well and functioning in Canada....

ARTIST IS KENT MONKMAN,  A CREE ARTIST WHO EXPLORES THEMES OF COLONIALIZATION

Older Post Home
Subscribe to: Post Comments (Atom)
(CREDIT: image in the Daughter header is The Schull Selkie by Liam Sharp) - I actually ordered a print and have it framed in my home! 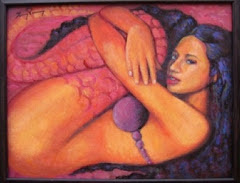 The Seanchai - my stories

'Fess up.. who reads

Sonnet XXXIV (You are the daughter of the sea)

You are the daughter of the sea, oregano's first cousin.
Swimmer, your body is pure as the water;
cook, your blood is quick as the soil.
Everything you do is full of flowers, rich with the earth.

Your eyes go out toward the water, and the waves rise;
your hands go out to the earth and the seeds swell;
you know the deep essence of water and the earth,
conjoined in you like a formula for clay.

Naiad: cut your body into turquoise pieces,
they will bloom resurrected in the kitchen.
This is how you become everything that lives.

And so at last, you sleep, in the circle of my arms
that push back the shadows so that you can rest--
vegetables, seaweed, herbs: the foam of your dreams.